The benefit of extended time at home with my parents (thanks, WFH!) is that I’m getting extra time with home food. Let me clarify the term for those who may be unfamiliar. When I mention in conversation to friends that I might be missing Indian food, they always suggest I order in from one of our go-to Indian restaurants. Now don’t get me wrong, I love restaurant Indian food, but I don’t think of it when I have a craving for Indian food.

When I want Indian food, I want my mom’s food. Aka home food.

Restaurant Indian food reminds me of weddings and parties, where the side tables are lined with those stainless steel chafers with the candles underneath that keep the food warm. The food is a thick and creamy stick-to-your-ribs kind of good, and I could spot that signature tikka masala scent from miles away. It brings me an immense amount of joy. And don’t even get me started on how good leftovers are the next day.

Home food, however, is where the magic is. The food isn’t quite as rich and buttery, and I can’t say that we’ve ever really made garlic naan at home ourselves except for when the craving for restaurant food strikes. The stacks of charred roti’s in my mom’s tortilla warmer and Haldi stained spice spoons are what brings everything together. Dare I even call the food my mom makes healthy? It’s the food I think of when I’m really craving Indian food. 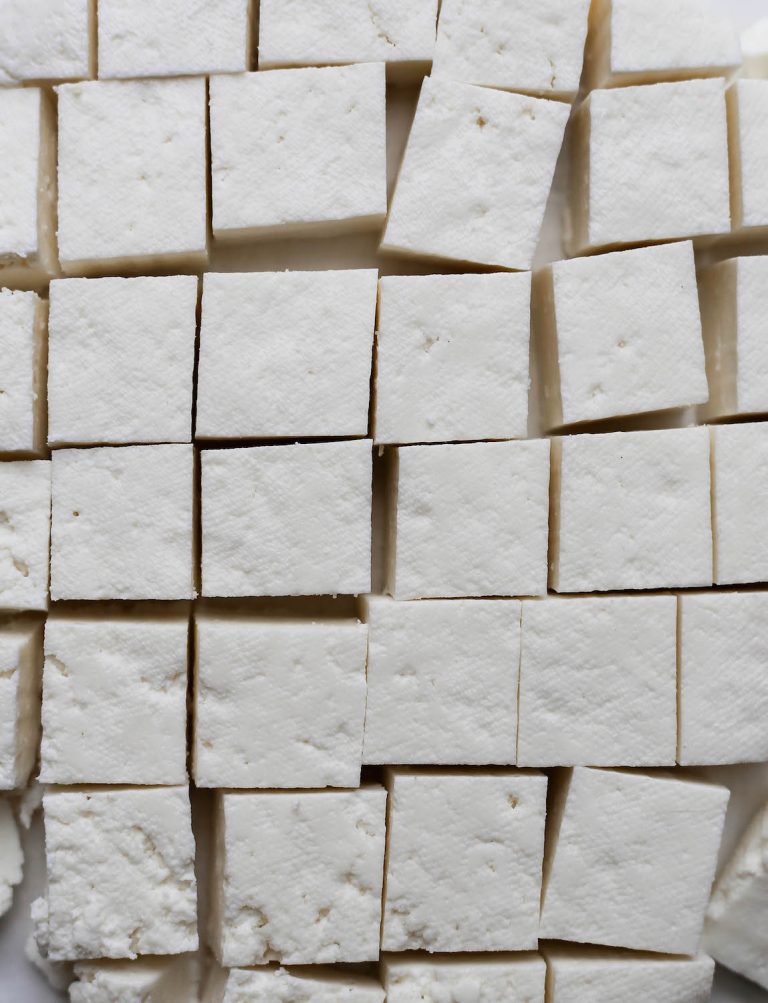 It seems a shame to me that a lot of “cultural” foods get a rap for being unhealthy purely based on people’s restaurant experiences where indulgence is the goal. Look, I love heavy cream and mounds of ghee in food too. Who wouldn’t? But so many of the foods and dishes we get at restaurants are actually just a part of people’s everyday dinners, just slightly different.

One such example is one of my absolute favorites, saag paneer. When most people think of saag paneer, they probably think of heavy cream and butter-laden creamed spinach dish with tons of paneer cubes that you dunk your tears of naan in. Fair enough. It’s a beautiful image.

My mom’s saag paneer recipe though is one of those dinner staples that are so delicious you forget that you’re eating spinach and that it’s basically a healthy delicious and nutritious spiced dinner to eat with a nice charred whole wheat roti. Would you ever think I would’ve described Indian food in that way? It doesn’t matter, it’s freaking delicious. 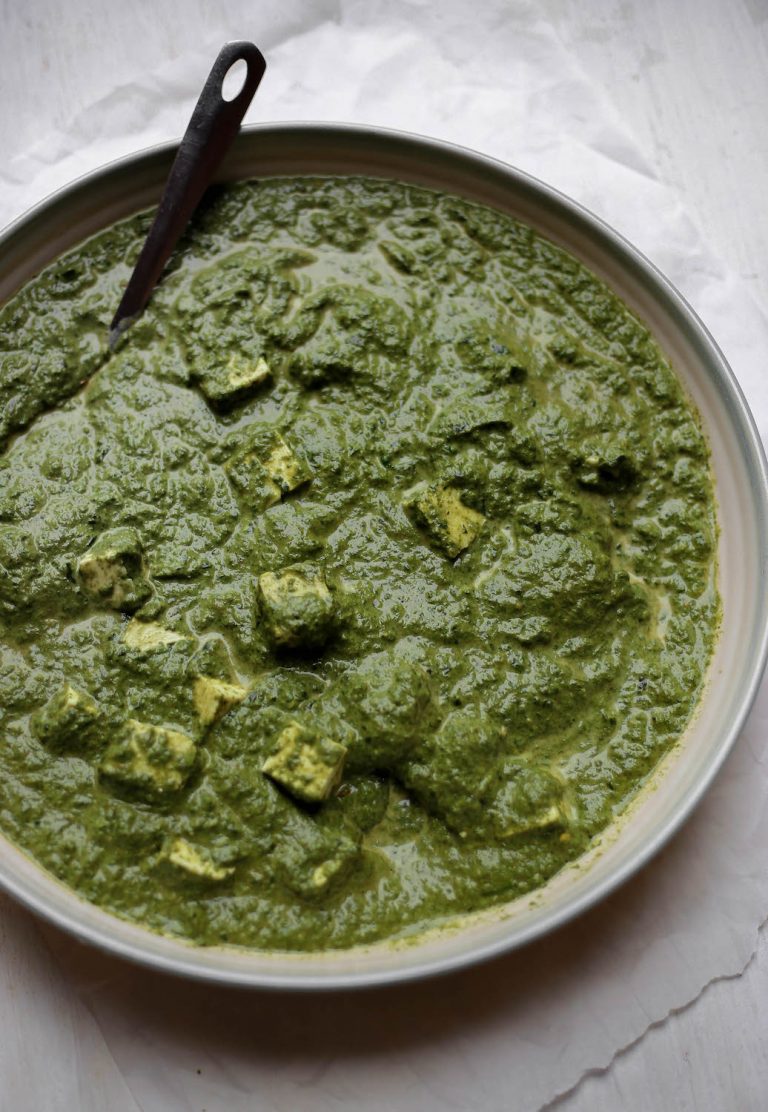 Being at home, I finally paid attention to what my mom was putting in the pot on the stove so I could write down the recipe and attempt to recreate once I’m back in my own space. I.e. my mother doesn’t write down measurements so I had to figure it out based on careful examination.

Literally this dish could not be simpler to make. You’ve got your thawed frozen spinach that you boil, you blitz the spinach into a nice creamy consistency, then add in the spices and my mom’s ingredient for extra creaminess that makes this a lighter and healthier version than what you find in restaurants, which is sour cream. Toss it all together, throw in some paneer cubes, and you are set for a delicious and cozy plate of greens that will make you want to eat spinach on repeat.

There are versions out on the interwebs that include things like onion or ginger, different spices, you name it. This is always been my favorite version though. It’s no frills, simple, and just a nice cozy meal that reminds me of home. I do not think there is only one “authentic” version of a dish like this. Aunties all over the world put their own spin on it, use their favorite ingredients or spice ratios, and I welcome you to simply use this as your starting point and adjust to your own tastes! 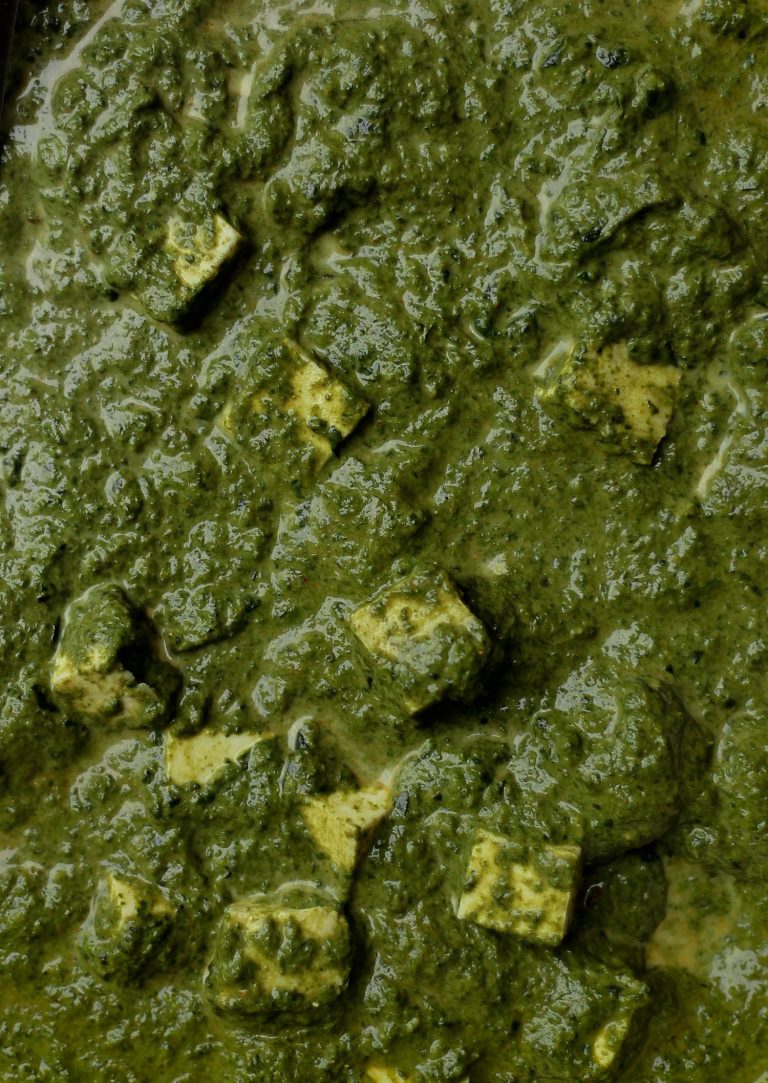